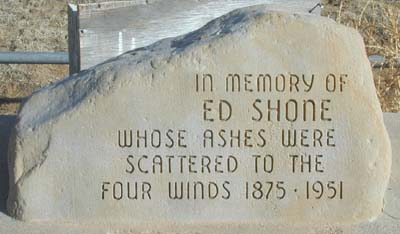 The Shone Memorial is located in southeastern El Paso County. From the eastern edge of Colorado Springs, take Highway 94 east for 24 miles; turn south on Edison Road and go 10 miles; then turn east on Shear Road and go three miles. The marker is on the southwest corner of Shear and Whittemore Roads, fenced off with a pipe barrier from a pasture. According to GPS-derived geolocation (accurate to within 10 meters), the grave's coordinates are latitude 38°41'39.7"N and longitude 104°06'32.0"W.

Edward "Teddy" Shone was born in England, spent time in South Africa, then journeyed to Colorado in 1900. In 1916 Shone and a partner built a store at the corners of Shear and Whittemore Roads; Shone operated the store, which sold groceries and gasoline, until 1948 when his health declined. At his request, his ashes were scattered near his store, which was later torn down. In 1969, friends George Whittemore and Sam Lindt erected a permanent monument to his memory. It reads: