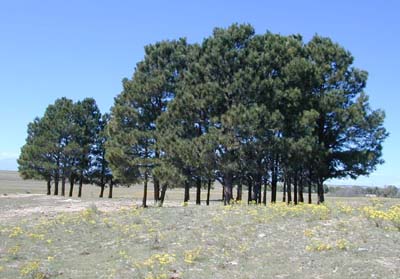 No markers remain at this burial ground located in a grove of pine trees at the southeast corner of Scott and McClelland Road in eastern El Paso County. To reach the site, from Colorado Springs drive east on Highway 24 past Peyton. Turn right at McClelland Road. Proceed two miles south past Scott Road, and the grove is close to the road on the left about a tenth of a mile past the intersection of Scott and McClelland. According to GPS-derived geolocation (accurate to within 10 meters), the site's coordinates are latitude 38°59'48.0"N and longitude 104°24'13.3"W. For permission to access the site, contact owner Norma Scott, 22692 Scott Road, Calhan, CO 80808.

The trees were planted by John Scott, father of Norma Scott, after a 1965 flood threatened to wash out the burials. The graves were there when he bought the land in the mid-1930s and they are said to be those of an older man and a baby of a hired hand. The Scott sisters remember family members coming to visit the graves until about 1990. They also believe the baby could be the burial erroneously labeled "Scott Grave" in the Colorado Cemetery Directory, as they know of no little girl Scott buried on what was formerly their father's land. A neighbor, Florence Pohlson, recalls hearing that four or five members of the Redmond family are buried here. The Directory says the graves here were possibly burials of the Redmond family that owned the land about 1903.

William Redmond bought the northwest quarter of Section 24 from the government on January 26, 1893, for $10 per acre. Patent no. 4390 was issued for the land on July 16, 1900.(1) In June 1900, Caroline Redmond, 56, was living in this district with her son, James, 18, born in Michigan. An Indiana native, the widow Caroline was the mother of 13 children, ten of whom were living. She owned her farm free and clear.(2) Caroline Redmond, "widow of William Redmond," recorded with El Paso County the patent for her homestead on the northwest quarter of Section 24, Township 12 South, Range 63 West, the location of these graves, on October 16, 1903.(3) She died less than a month later, on November 13, 1903, in Colorado Springs. Her funeral was held November 15 in St. Mary's Catholic Church and she was buried in Evergreen Cemetery, Colorado Springs.(4)(5)

On March 2, 1907, son James Redmond quitclaimed rights to the land to John F. Mullaney. The document names all ten of Caroline's heirs: sons James, Peter, Thomas, Edward J., Sylvester, and Joseph Redmond and daughters Maud M. Piper, Nellie Lehman, Margaret Lorraine, and Loretto Finley.(6) Mullaney and his estate continued to own the quarter section with some interruptions until it was deeded to John and Kathryn Scott. It's very likely that the older man said to be buried here is Caroline's husband, William Redmond, an Irish immigrant who died before June 1900. There is no record of an obituary for him in the Gazette index, nor is there a burial record for him in the Evergreen Cemetery index.