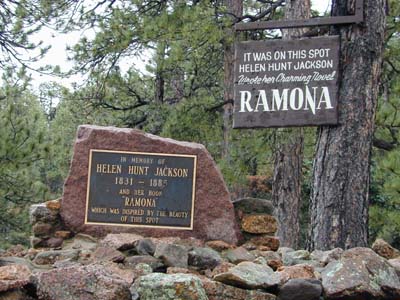 Novelist and poet Helen Hunt Jackson is best remembered for Ramona, a novel described as "a romantic study of Spanish patriarchal life in California [that] immediately became famous for its protest against governmental cruelty to Native Americans."

At her request, Jackson was buried October 31, 1885, at Inspiration Point in scenic South Cheyenne Canyon, southwest of Colorado Springs. According to GPS-derived geolocation (accurate to within 10 meters), the memorial's coordinates are latitude 38°46'51.9"N and longitude 104°52'36.7"W. Because the scores of people flocking to her gravesite were threatening the natural beauty of the canyon, her remains were moved to the family plot at Evergreen Cemetery, Colorado Springs, on November 7, 1891. The land is now part of Seven Falls, a privately owned recreation area that charges an entrance fee. The plaque on the large mound of rocks that was her original burial site reads:

Oh, write of me, not "Died in bitter pains,"
But "Emigrated to another star!"
~Helen Hunt Jackson

There is also a memorial plaque for a former Seven Falls owner at the Inspiration Point overlook itself: 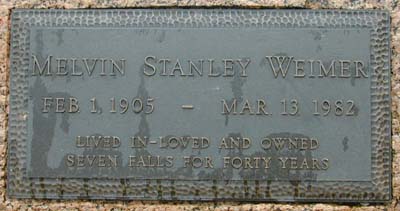