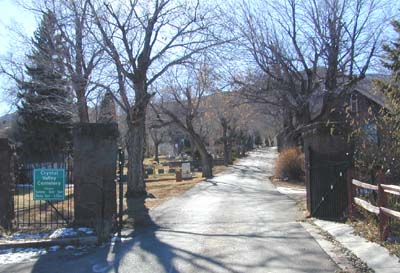 Crystal Valley Cemetery was established in 1885 and is nestled in a valley that offers a spectacular view of Garden of the Gods to the north, the city of Colorado Springs to the east, and foothills to the west and south. The grounds are well maintained and contain many mature trees. The cemetery's gateway of ornamental cast iron and greenstone reflects the type of architecture that is found throughout the historic district of Manitou Springs. Many of the family plots within the cemetery are surrounded by low stone retaining walls to accommodate grave sites in the hilly terrain. A concrete ditch bisects the grounds and a bridge allows access to the more recently developed southern section. The cemetery contains an infant burial area, several large structures, and many historic headstones and ornate ornamental ironwork that date to the late 19th century. By 1996, almost 1,900 burials had taken place.

For the purposes of this index, the cemetery layout consists of blocks numbered 1 through 94 (interspersed with missing blocks), running from east to west and flowing from north to south. (Please note that where "block" designations are used in this document, sexton records use the term "section".) Most of these blocks have interior or adjacent supplemental blocks that use A, B, and C designators (i.e., major block 14 has interior blocks designated 14A, 14B, and 14C) to identify areas that were originally walkways or unused areas that are now being used for burials. Each block generally has 10 lots, but some blocks have as many as 28 lots. The supplemental blocks having A, B, or C designators do not use lot designators, skipping directly to plot numbers. Starting in the southwest corner of each lot, plots are numbered from south to north and then north to south as they form an S-pattern within the lot. The plat map included provides adequate detail to locate the general location of all grave sites.

According to The Springs of Manitou by Bettie Marie Daniels and Virginia McConnell, the original Manitou Springs Cemetery was located on Pawnee Avenue, across the street from the present-day public library. However, by the early 1880s, the City of Manitou was becoming a boom town for health-seekers and tourists, which prompted the owner of the property, Dr. Isaac Davis, to replat the area. As a result, the cemetery was moved to Crystal Valley following an arrangement with the City of Manitou Springs to exchange the original graveyard site for the present property. The removal of bodies from the original location began in 1885. That year, the first monument erected at Crystal Valley was commissioned by Dr. Davis in memory of his mother, Hannah. The 11-foot sandstone shaft surrounded by a four-foot wall is still present today. Although fire destroyed many of the early records, it is evident that by the early 1890s private ownership of the cemetery had ended and the city had taken claim of the land and management of burials.

Dominating the entrance to the cemetery is the Arts and Crafts Bungalow, built in native greenstone with an oak door and iron urn. This building served as a funeral chapel for mourners before graveside services were allowed before adequate roads were established. Opposite this structure is the mausoleum of Theresa Kenney, an industrious Austrian woman who spent 14 years constructing her tomb, completing it in 1938. Theresa visited her mausoleum every afternoon and filled the tomb with furniture and an organ, which she played on occasion. This organ, donated to the city following her death in 1943 and used for many years in the funeral chapel, now resides in the Miramont Castle Chapel.

Other notable sites in the cemetery include the greenstone mausoleum built for the Richards family, with its curved Egyptian-style pediment, a headstone carved in the shape of stacked logs for Woodman of the World John T. Lily, and the small grave of three-year-old Freddie Schneider, which is surrounded by an elaborate cast-iron crib.

Several prominent individuals are buried at Crystal Valley Cemetery. General Charles Adams negotiated for the release of captives during the infamous Meeker Massacre in Colorado. His headstone is inscribed "Rescuer of the Meeker women after the Indian massacre at the Colo.White River Agency - Sept. 29, 1879." He also served as U.S. Ambassador to Bolivia and upon retiring to Manitou Springs, General Adams was instrumental in organizing the Manitou Springs Mineral Water Bottling Company.

Emma Crawford, an accomplished concert pianist and spiritualist from Boston, is buried here although no stone marks her grave. Emma came to Manitou Springs for "the cure" and never left. She requested a burial on Red Mountain, which overlooks the city, and a photographer was summoned to document the funeral. Many years later, however, the casket washed out of the gravelly soil, and her remains were laid to rest in Crystal Valley.

Inez Hunt, a respected Colorado writer and poet, is also interred here. Among her writings are children's books that address the lives of individuals in Colorado history and multicultural issues in the annals of the American West.

In addition, to honor Union soldiers buried here, the National Organization of the Sons of Union Veterans of the Civil War is erecting white marble headstones.

The often harsh weather of the Pikes Peak region has posed problems for this cemetery located in a valley. Devastating floods, the worst of which occurred in 1935, have washed out the entire southeast portion of the graveyard. As a result, a drainage ditch and retaining walls have been constructed to prevent further damage. A tornado ripped through the cemetery in 1979, destroying many older trees and part of the concrete fence that surrounds Theresa Kenney's mausoleum. Although Crystal Valley Cemetery has had to endure an unforgiving environment, it has been proudly maintained for more than one hundred years and was added to the National Register of Historic Places in 1982.